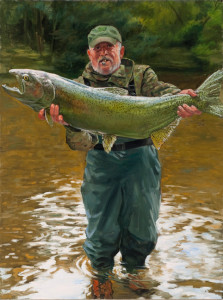 As a perceptual painter with a career spanning thirty years, Marion Kryczka focuses on both the rendering of the objects and scenes before him, and the inherent meanings they possess. Some of these paintings portray domestic interiors and still lifes, while others explore the interplay of three dimensional art objects within a landscape or architectual space. All of the works are concerned with the discovery of the formal and the poetic potential of objects in space.

In his still lifes, Kryczka is able to choose and manipulate objects at will, like designing a stage production. He assembles objects like glass jars of preserved foods, old photographs, human and animal skulls, tools, sausages, candy bars, his own drawings, and fish with careful attention to formal composition and the meaning that these players will ultimately reveal. 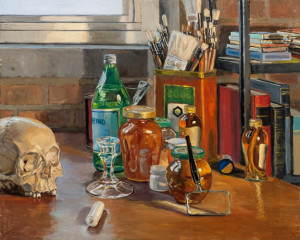 Kryczka’s contemplative arrangements deal not only with the painterly rendering of surfaces and balance of forms, but through the manifestation of his observations during this process, communicate universal themes such as desire, beauty, life, death, and the struggle inherent in all relationships – including the duality within our own human nature. Following in the tradition of vanitas painters such as Jan Davidsz. de Heem, Kryczka may use a skull to embody mortality and the ultimate end of earthly pursuits. A creased photograph evokes memory and personal history. Jewel-like jars and bottles are beautiful to look at, but also speak of attempts at suspension and the effects of time. The subject of Kryczka’s Filletted Male Salmon, like that of Jean-Baptiste-Siméon Chardin’s The Ray, is not merely a fish, but symbolically invites thoughts on vitality, decay and masculinity.

When Kryczka paints a domestic interior or a landscape (as with his still lifes), he is finding the compositional balance of objects in space, while also communicating content through form. A stairway in a home transcends its mundane reality through the interplay of light and shadow and by the framing of the scene (bringing to mind both the flat planes of Medieval art and the multiplicity of cubism). A snowy streetscape has the distinct and particular aspect of a Chicago winter, with elevated tracks framing a car-lined street and falling snow mixed with streetlights on an early morning. 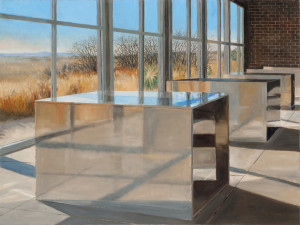 In his works, Donald Judd at Chinati #1, #2 and #3 , Kryczka finds the subject of his still life in three of Judd’s 100 works in aluminum at The Chinati Foundation, a museum founded by Judd, in Marfa, Texas. Though Judd’s works are synonymous with minimalism, an art form in which the subject is reduced to its most basic elements and the “hand of the artist” is generally considered to be invisible, Kryczka and Judd share an interest in the transformation of space through the interplay of shape and form. In these paintings, Kryczka deftly handles the highly reflective surfaces of the aluminum sculptures, capturing Judd’s carefully chosen orientation of his own sculptural installation against a scenic view of tall grasses, framed in the windows of the converted artillery shed in which they are displayed. The paintings of the sculptures – although still representative works – revel in the abstract playground of light, shadow and reflective surfaces.